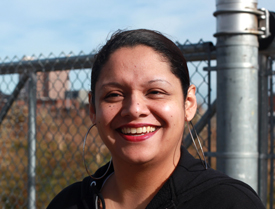 It was truly an honor to see Kim Wasserman, Founder and Executive of Little Village Environmental Justice Organization (LVEJO), awarded the 2013 Goldman Environmental Prize for North America for her work organizing communities of color and coalitions against powerful coal interests. The Goldman Prize is the world’s largest prize honoring grassroots environmentalists – along with five other outstanding individuals from Africa, Asia, Europe, Islands and Island Nations, and South and Central America. The Prize recognizes “individuals for sustained and significant efforts to protect and enhance the natural environment, often at great personal risk.” Each winner receives an award of $150,000.

LVEJO has received funding through the RE-AMP Network for two consecutive years, beginning in 2011, in support of their successful campaign to close the Fisk and Crawford Coal plants and to secure transit access for Chicago’s Little Village and Pilsen neighborhoods. This place-based organization has successfully engaged youth from the neighborhood of mostly low-income immigrant residents in leadership opportunities that have shaped and executed these and other successful campaigns. Many of these youth leaders are staying engaged in the climate movement, and continuing to elevate the need to marry justice and the environment. Kim Wasserman was born and raised in Little Village, and lived with her family in a house less than a mile away from the Crawford plant. She launched her work as a community organizer in response the health impacts her infant son was experiencing from the heavily polluted air. Studies in 2001 and 2010 revealed that the coal plants caused 2,800 asthma attacks, 550 emergency room visits and 41 early deaths every year.

Kim took the stage stating “We are not only the face of climate change, we are the solution”, driving home a critical message from the growth-edge of the environmental movement: Impacted communities on the front-lines of environmental degradation, often low-income communities of color, are more than foot soldiers, faces on billboards, votes in the ballot box. These are people who have powerful persuasive stories to tell that push the moral imperative, who are building lasting place-based community power, who are setting an agenda that broadens the message beyond ‘climate’ to include health, prosperity, and equity. Edison International, the multi-national corporation that owned both coal plants had operating revenues of $12.7 billion. With a coalition of 60 members the plant closures were won because, in the words of LVEJO, “ when front-line communities organize, change happens.”

With less than 5% of all environmental funding going to communities experiencing and fighting harms, LVEJO is working with other environmental justice organizations to challenge the mainstream environmental movement (including ‘big greens’ and the funding community) to:

The Will Steger Foundation congratulates Kim and all of the LVEJO staff and alumni who have worked so tirelessly on the fight for a clean and just energy future. Their work is rich with lessons for all of us in the climate fight and provides critical insight and perspective that we can’t win without.