Some things only work if you believe in them – the tooth fairy, Tinkerbell, the international banking system, and our ability to take meaningful action to prevent the worst impacts of potential climate change.

When you stop believing in the tooth fairy, you don’t get money under your pillow if you lose a tooth. If you don’t believe in Tinkerbell, she can’t survive. If people lose faith in the banking system, whether during the Great Depression or the financial crisis of 2008, the banking system can fail.

There are a lot of critics of the Paris Agreement and skeptics about whether human beings have the political will and the technical ability to take meaningful action before our planet is irreparably harmed. I know one thing for sure, if the world gives up on working together, innovating, and enacting good policies, we won’t be able to conquer this challenge.

The question I have been asked most often while I have been here is: why are a group of state officials at COP23? You cannot participate in the negotiations, and the current Administration holds views opposite to yours, so what good does it do to be here?

I think it does a tremendous amount of good for the nations of the world to see how much of the United States is still committed to reaching the goals articulated in the Paris Agreement. Even though I feel like we are the incredible shrinking country since the 2016 election – with our absence from major dialogues with the rest of the countries of the world and our seemingly irrational official statements on international affairs – the rest of the world still takes note of what the United States does. We are still the largest economy in the world and without question the largest military power.  For most of our nation’s history, we have enjoyed a special narrative both at home and abroad. We are a nation founded on the ideals of the individual liberty of each citizen, democracy, and the rule of law. Since the end of World War II, we have been a credible voice for human rights. We have in many ways been the city on the hill.

When the United States federal government acts in a way that is inconsistent with our national narrative and our founding principles, and when we relinquish our role as a global leader, the world takes note. Given the amount of attention our decisions get, it’s really important that when our federal government makes a wrong decision, the people of the United States stand up and make their voices heard.

I’m here because I believe we can take meaningful action to prevent the worst impacts of potential climate change. I’ve been doing this work as a state leader, and I’m as inspired as I’ve ever been to keep doing this important work. The really great thing about policies that fight climate change is that they are also good for our economy and for each of us. In Minnesota, we’ve shown that we can have a strong economy while taking actions that reduce climate pollution. Our Minnesota success story, combined with others like it here in Bonn, give people a reason to have faith. 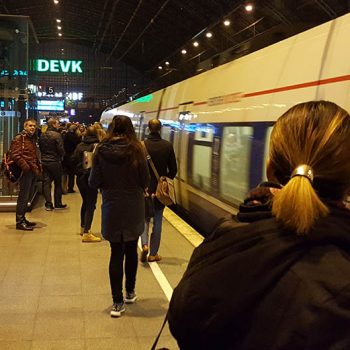 (I’ve included a picture of cold, dark Germany – where we are…and warm, sunny Fiji – where we wish we were!)